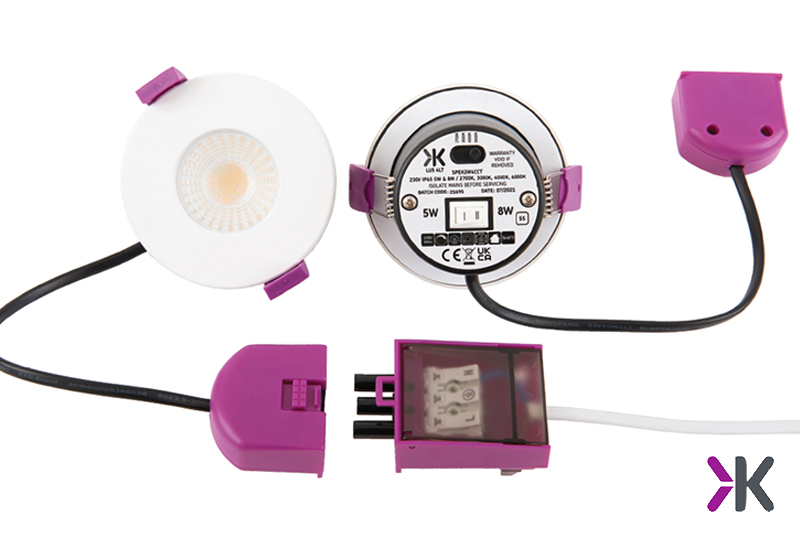 PEW spoke to Russell Vanstone, Product Development Manager at Knightsbridge, to get his view of where LED lighting is going and developments that could be real revenue raisers.

RV: It would be hard to argue against the assertion that LED lighting is now the predominant lighting source for UK residential, retail and commercial applications. Industry researchers IBISWorld estimates that sales for LED products and ancillaries will reach £2.4 billion this year. That’s a lot of LED lamps flying off your readers’ shelves!

While other mainstream lighting sources have fallen by the wayside, the LED world has grown and grown. There’s probably not a house, office or retail shop in the UK that doesn’t have LED lamps installed somewhere. In fact, according to findings from German electrical magazine Reichelt, 73% of UK consumers are already reaping the benefits of using LED lamps in their home, with 17% of respondents having already switched to LED lights completely. So yes, it would be safe to say that LED is king of the castle.

Q: Why do you think that is?

RV: There are many reasons behind the success of LEDs, one of the most influential being the vastly improved lumen output over the last couple of years. Couple this with the ability to put LEDs into almost any kind of light fitting, making them extremely flexible and versatile, and you have the almost perfect lighting solution.

You only need to look at the growth in accent lighting, task lighting, decorative lighting, track lighting – the simple pendant hanging from the ceiling just doesn’t cut it anymore! Architects, interior designers, even the homeowner have all latched onto the transformative effect LED schemes can have when positioned and installed correctly. The colour rendering, the efficiency, the energy-saving nature, all contribute to the increasing adoption of LEDs across home, business and retail environments.

“Imagine a scenario where the installer could effectively ‘dial in’ the characteristics from wattage to CCT prior to the installation and then change it at a later date should the need arise. ”

RV: I think that one of the challenges is bringing greater utility to LED lighting products. By that I mean increasing a product’s functionality, its ease of installation, even its economy of stocking for wholesalers, that’s to say a ‘one product, numerous solutions’ approach that allows inventory to be kept to the minimum while offering the buyer a product that meets a variety of needs. That’s an exciting concept.

For instance, let’s take an LED downlight. Currently, an installer will invariably choose a product that offers a fixed performance in terms of watts, lumens, colour render and once installed that’s it. The scope for changing how that installation works is limited to removing the downlighter and installing another one with different performance characteristics. That’s just more time and cost. Now imagine a scenario where the installer could effectively ‘dial in’ the characteristics from wattage (lumen output) to CCT prior to the installation and then change it at a later date should the need arise.

If you make the connector system one that can be plugged in or unplugged very easily to facilitate removal of the unit and you now have a downlighter that really adds value.

Now the next challenge is to maximise the installation opportunity for your ‘next generation’ downlight by making it super compliant whatever the situation or application. Make it Fire Rated for solid timber, web joist or I-joist configurations and then throw in an IP65 rating so it can sit happily in bathrooms, wet rooms or wherever moisture is prevalent.

You can begin to see the huge benefits of such a product. Then the finishing touch would be to offer different style bezels to suit the colourway of the room or installation in question. Again, these could be changed at a later date to suit any refurbishment or redecoration. It really is lighting the way you want it.

For the stockist it also offers a great opportunity to offer a multitude of lighting options with the economy of stocking just the one product, which can be variously tailored to the end-user’s requirements. No more filling shelves with lamps of different outputs and colour temperatures. Say goodbye to excess inventory!

Q: So, is that that something the trade counter can look forward to soon?

RV: Yes, indeed it is. Our own take on this is called SpektroLED, something we are very excited about. It addresses the points I have mentioned previously, and we believe that the wholesaler will reap the benefits offered by this new, exciting LED downlight. Essentially it is offering 40 lamp permutations from one single product –two selectable wattages and four colour temperatures provide eight different formats, which are then multiplied by the five available bezel options. For the wholesaler it’s all about offering choice without the penalty of stocking a vast array of product options. It makes sense both from a lighting point of view and commercial point of view, a win-win if you like for the installer and the trade counter.