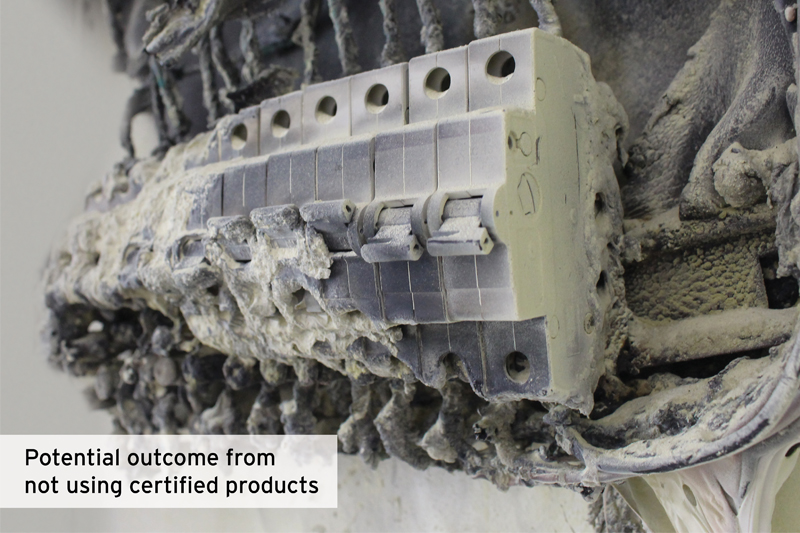 Families and employees are being left vulnerable due to untested electrical components being installed in their homes and workplaces.

That’s the claim from the commercial director of an independent supplier worried about the consequences when untested – or poorly tested – products fail.

Paul Dawson from fourth generation family firm Niglon, based in the Midlands, says they are seeing a worrying number of circuit protection products being sold which have not been independently tested by a reputable third party.

With potentially fatal consequences if this equipment fails, Paul says it’s not enough for wholesalers to assume everything they buy is of a high standard – and is calling on the entire industry to take responsibility for the safety of end users.

“It would be easy for a wholesaler to assume the manufacturer is ultimately responsible for product safety, but the onus is on everyone within the supply chain. Put simply, this is life or death – and everyone involved in the sale or installation of a component has an obligation towards the end user, not just to follow the industry’s rules and regulations, but also from a moral standpoint.

“The safety of electrical circuits and the components within them isn’t something which should be left to chance, given the potential for harm if a product is faulty.”

Niglon has invested time and resources into ensuring its circuit protection products are certified, choosing only to partner with businesses who have matching high standards. So, when surge protection devices were introduced into the 18th edition wiring regulations (BS7671), and the team had a choice between sourcing an untested lower cost device or partnering with a European manufacturer who had more than seven decades of experience – the choice was easy.

The company opted for the latter because they knew the products were certified, something especially important when it comes to surge protection devices because of the limited ability installers have to test them once they’re installed in a home or place of business.

But it’s not only about firmly believing in third-party independent testing for these important devices, the Niglon team is also campaigning for total transparency around which products have been tested to this standard. To this end, Paul and his colleagues are calling on wholesalers to ask for proof of certification when they source a new product to stock.

Paul explains: “Circuit protection devices in our catalogue and online are clearly marked as being accredited by SEMKO, VDE or TUV and naturally, if a customer asks us to produce proof of this certification then we are able to do so immediately. We believe that level of transparency is paramount to keep standards high in the electrical industry; wholesalers should have the utmost confidence in the components that they are selling, and the ability to reassure contractors and end users of their safety.

“It’s not something which can, or should, be left to chance given the huge risks to life and property where untested products are installed. There’s no way of knowing when or if these products will fail – and with any circuit protection device, there is a potentially fatal outcome should that occur. We don’t believe doing nothing until something goes wrong is an option – especially when this risk can be eliminated with proper testing. Knowing they could have intervened and stopped harm coming to another human being is not something anyone wants on their conscience, so we are calling on the industry to act now before disaster strikes.

“This potential for loss of life is clearly the most important reason for better testing and more transparency, but raising standards so the entire industry is openly declaring certification would have other positive benefits too. Wholesalers able to reassure customers of the safety of all of their products are bound to build trust and their reputation in doing so, for example.

“Individuals and businesses rely on contractors to install electrical devices in their properties, and they place a great deal of trust in those contractors that those devices are safe. With so many products out there not carrying third-party certification we are sure it’s only a matter of time before there are devastating consequences.

“We are calling on the industry to act now: to help us educate end consumers about why all of the products in their homes and workplaces should have been thoroughly tested, to ensure asking for proof of certification becomes a routine question when contractors and wholesalers source a product, and to stop harm coming to anyone because of a faulty device.

“Wholesalers are an integral part of making this change – by making certification the primary reason to buy a product rather than a slightly better price point, they can help safeguard themselves, contractors and consumers against the terrible consequences associated with the ticking time-bomb of untested devices.”

Visit www.niglon.co.uk for more information about the company.