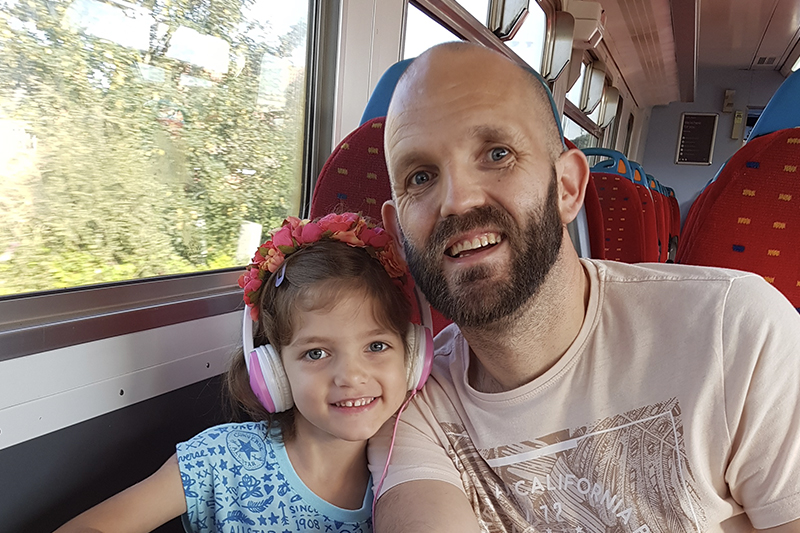 Donating to charity can sometimes seem a little impersonal – especially in the modern times of online giving and direct debits – but when Niglon made the decision to partner with the Electrical Industries Charity it resulted in a real affinity with the charity and its beneficiaries.

The Niglon team wanted to help the EIC improve the lives of their peers across the electrical industry who had been impacted by mental or physical ill health, financial worries or Covid-19. That’s why they are keen to share the stories of those individuals, to show these are real people for whom the EIC’s support has made a real difference. People like Shane – an electrical distributor who contacted the charity after becoming unwell.

After starting a new job involving long hours and lots of travel, he began feeling very tired and breathless; when the symptoms worsened, he was sent for various tests – a stressful time for him, his partner Emma and his children Eva and Mya who were all about to travel to Great Yarmouth for a holiday.

Shane’s employment was terminated just before the end of his probationary period, and he became even more unwell to the point where he spent their trip away bedridden. He found out he had fluid on his lungs, and by this point had swollen up so badly he could barely get his trousers on.

A day after he returned home, Shane was rushed to hospital and diagnosed with a Dilated Cardiomyopathy. He was just minutes from having a heart attack, was in severe heart failure and had developed two blood clots in his heart – despite leading a healthy lifestyle and not drinking or smoking.

For the first two days he was in a critical condition, and he spent a further five days on an Acute Cardiac Unit. When he was discharged, he still needed to attend hospital appointments most weeks (some of which could be 70 miles away from his home) and he was unable to start his new job because of his condition.

While the family could cover the costs of their rent and utility bills, without Shane working full time and with the added costs of travel and hospital parking, they were having to sell clothing, toys and other items to afford their weekly food shop.

They turned to the EIC, who were able to provide a food voucher, pay for school uniforms and shoes, top up the girls’ school dinner cards, and secure funds from League of the Helping Hand for the new carpets the family had been in need of before Shane’s ill health.

And when he felt well enough, the charity even organised for Shane and his family to enjoy a day out at the Magna Science Adventure Centre in Yorkshire, booked their train tickets and sent some fun activities for the girls to do on the journey.

Tess Ogle, EIC Managing Director, said: “Shane’s health has now improved, and the family are in a better financial position. They have now relocated and both Shane and Emma have new jobs. The Electrical Industries Charity are so pleased to have been able to help this lovely family continue after a life-changing incident.”

Paul Dawson, Niglon’s Commercial Director, added: “Hearing Shane’s story really brings to life the impact the EIC can have, not just helping the family with the practical things they needed but also ensuring they were able to have a fun day out together after the incredibly stressful time they’d been through.

“It also highlights the reality that any of us could need the EIC – Shane was a healthy and employed young man, and then suddenly began struggling with his health and his finances through no fault of his own. This emphasises just how crucial it is to have the charity on hand to support anyone who finds themselves in need.”

From June 2021, Niglon is donating 10% of the profits from all sales of its Median products to the EIC as part of their ongoing partnership.

Anyone who needs support from the charity can email support@electricalcharity.org or call 0800 652 1618.