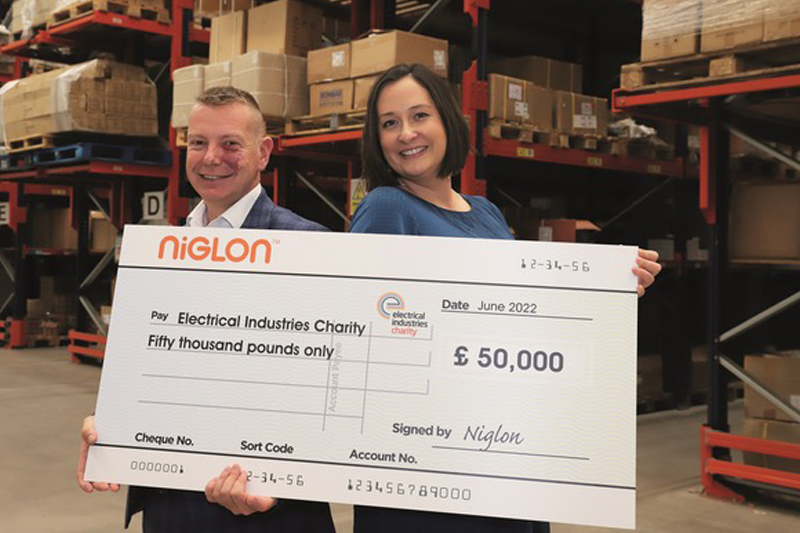 A £50,000 donation is set to support the wide-ranging work of the electrical industry’s charity.

Niglon became the first ever corporate partner of the Electrical Industries Charity last June – and now, 12 months on, has handed over what is hoped will be the first of many donations.

And Commercial Director Paul Dawson says working alongside the charity has opened his eyes to the breadth of services offered to current and former electrical workers – and their families.

As part of the partnership, Niglon has donated 10% of the profits plus VAT from every single sale of their Median wiring accessories range during the last year.

The company also worked to highlight and spread awareness of the fantastic work of the charity among the industry through traditional media, their company marketing materials, and on social media.

Paul explains: “I’ve been in the industry for more than 30 years, so have an awareness of some of the struggles facing workers and former workers – whether that’s around their health, wellbeing, or career. Sadly, we all know colleagues and peers who have been through tough times – and the hope is always, of course, that someone will be there for you in your hour of need.

“Linking the donation to our Median range, which is becoming ever-more popular, meant we had ample opportunities to highlight the EIC during the year, spreading awareness of their work alongside building up the donation amount.”

Find out more about Niglon here

To get more information on the Electrical Industries Charity, click here